Despite the cold weather conditions providing interesting bird movements across Britain, birding on Port Meadow has been relatively uneventful. It has been relatively static in terms of Caspian gulls in the roost. I suspect I have almost reached saturation point with this species in Oxfordshire, in terms of identifying individuals that are wintering in the county - over 30 at the last count. I haven't found a new bird for several weeks (although doubtless there are probably some at Appleford), and combined with the lack of movement typical of January/February it's been a case of seeing most of the same birds again and again. Our regular 2w bird, which Adam has dubbed "Eric" has been roosting most evenings, together with a few other birds of various ages.
Despite this, the roost has remained interesting with an almost continuous run of wacky hybrids, identification puzzles and straight-out "weirdos" that make gull watching such an entertaining form of birding. It is these birds that form the basis of today's blog post.
Starting on familiar ground, it was good to see XJNE back to terrorising the roost this week. It was also joined on one evening by two other Caspian x Herring gull hybrids, including remarkably a bird rung at the same Braunsdebra colony on the exact same day! A strange coincidence, although the birds came in separately and did not interact at all. Great to see the range of phenotypes that this mixed colony is throwing out - XJNE is a really nice bird, albeit with heavily marked greater coverts. 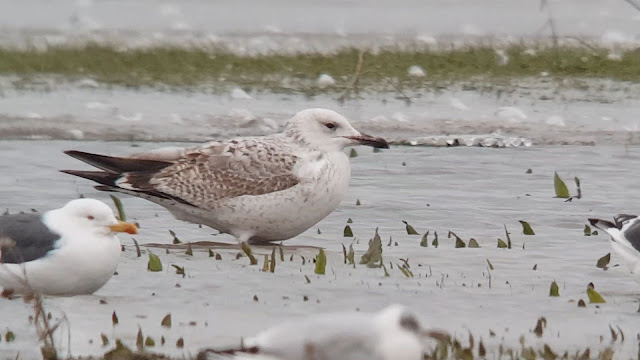 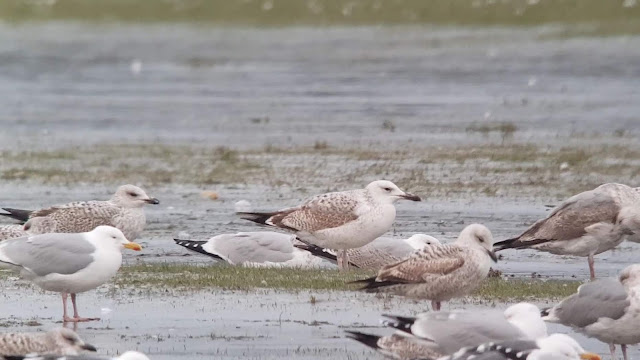 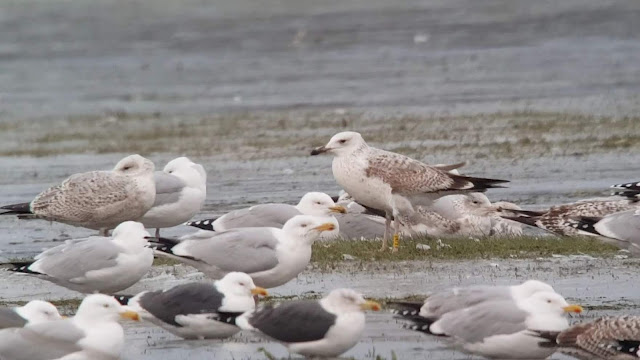 In stark contrast XJNJ is a real piece of muck, an obvious hybrid with clear cachinnans influence in many traits, with the scapulars, greater coverts, tail and underwing in particular being intermediate - it also has quite a thin bill and rangy structure - but other than that looking rather like a Herring gull. 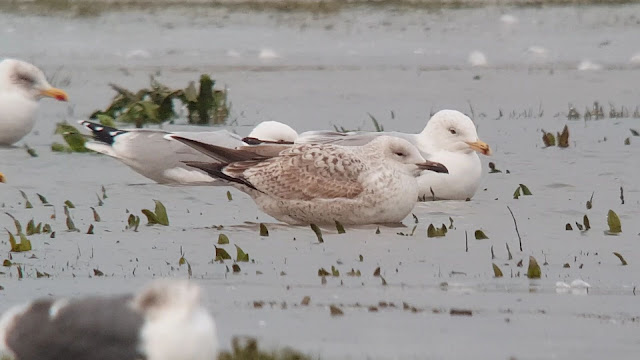 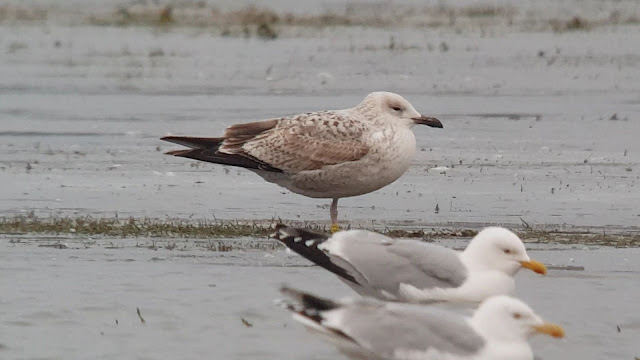 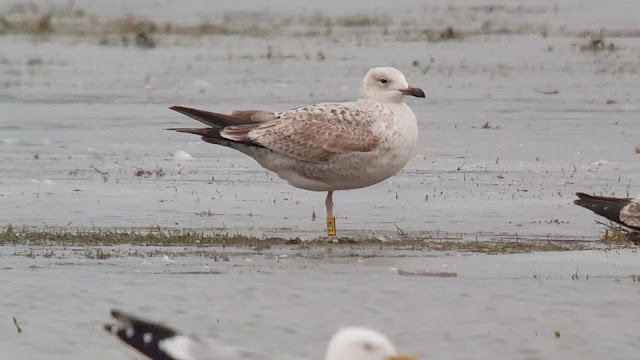 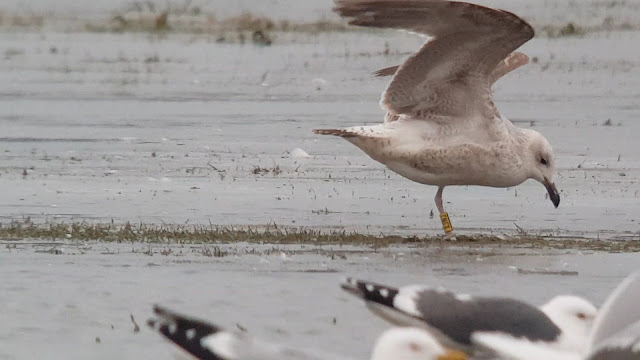 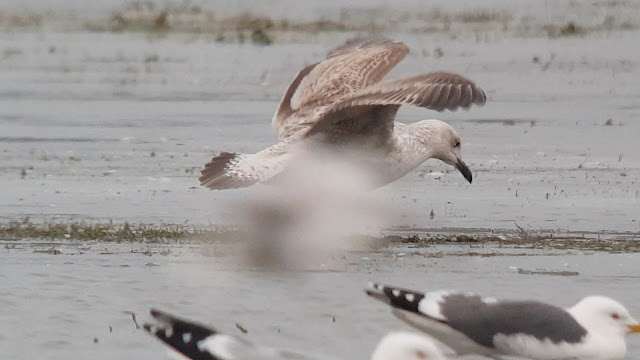 This third bird is very Caspian-like, and at distance in the Farmoor roost, for example, I think I would probably just have identified it as a dark Caspian gull. It has advanced moult with many replaced coverts and nice clean scapulars, coverts and tertials - all good features for Caspian gull. The underwing is quite streaky, as is the head, but these features can also be found on Caspian gull from the core range. Where it is less convincing is its structure and facial expression, although this was not immediately obvious at range as the bill is quite thin. I always find it confusing assessing facial expression on birds like this as any kind of head streaking changes all the contours of the face making it very difficult to tell if that classic cachinnans facial structure is still there. Having looked at photos of dark birds from Eastern Europe I struggle to reconcile the facial expressions of these birds with what I am used to from the birds that I have seen in Britain. In addition, the bird is quite small, and I do find that these (presumably female) birds can have very short bills and punched-in faces - see the last image in the set below for comparison and also this bird on Josh Jones' blog. However, I feel that this latest bird definitely has a very Herring-y look to the face, which is particularly evident in the third photo. 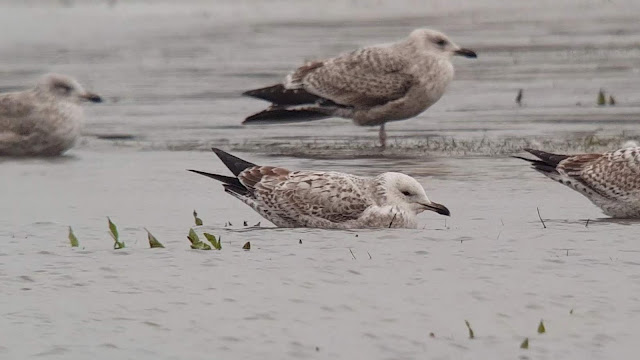 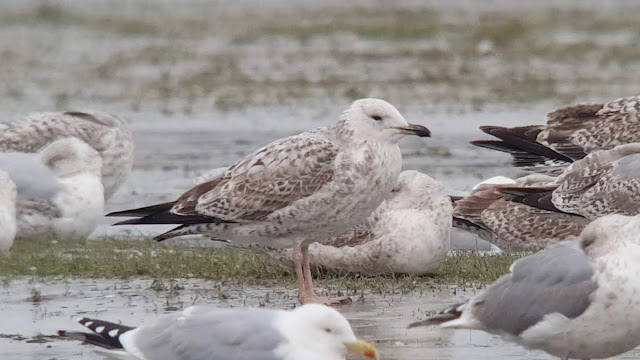 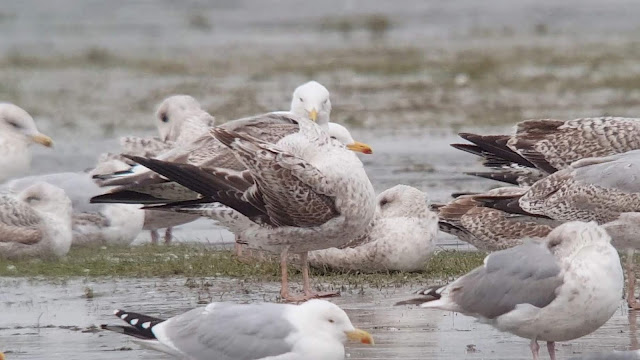 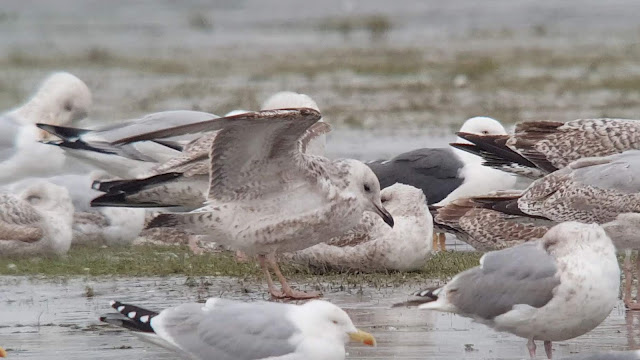 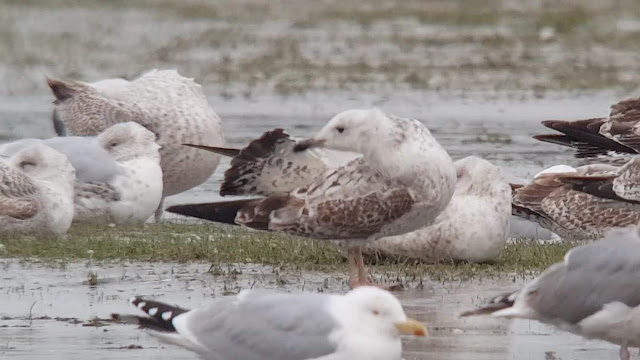 A new 2w bird has also arrived in the roost and for me is a good candidate for a Caspian x Herring gull hybrid, having a really Caspian-like facial expression combined with extensive head streaking, especially around the eyes. The tertials and greater covert patterns are an intermediate type, which could theoretically be found on either Caspian or Herring gull. 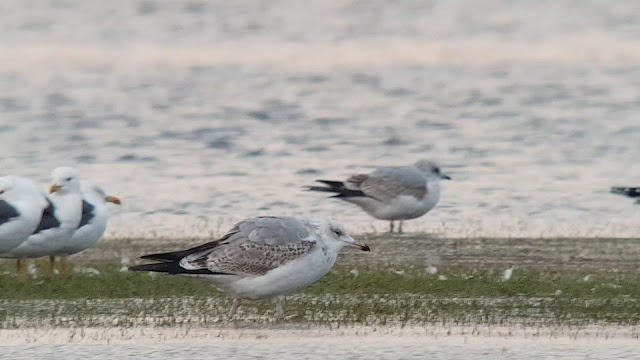 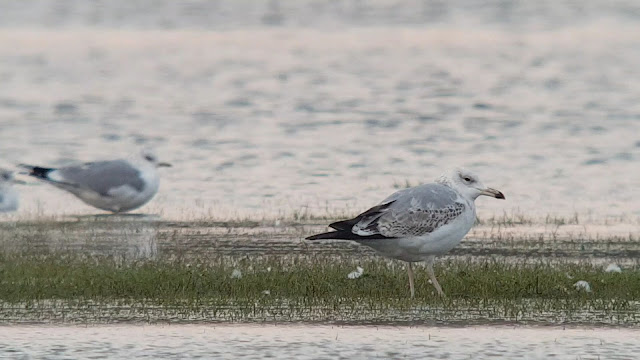 This dark, heavily streaked bird is probably a Herring x Lesser Black backed gull hybrid - with the added feature of a massively over-hooked bill! Its mantle shade was similar to Yellow-legged gull. It also has a yellow colour ring, although it's been too far away to read the code. 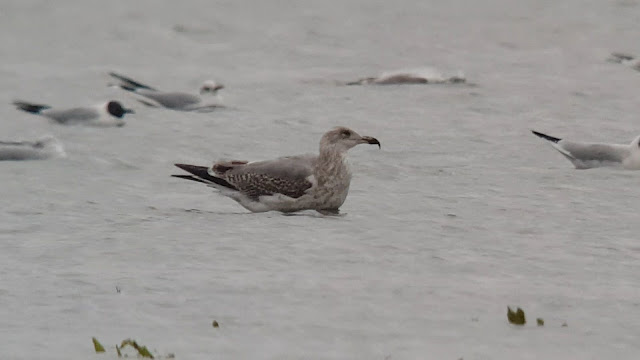 After the recent run of Easterlies I have been looking for yellow-legged Herring gulls in the roost, i.e. those "omissus"-types that originate from the Eastern Baltic. With several reported on the East Coast I thought it would only be a matter of time before one made it to the Meadow - small rewards, perhaps, but a goal like this keeps one going. I picked out this bird on 19th February and immediately thought it looked like a good candidate - the lack of any black on P5 would appear to rule out Yellow-legged gull, and the mantle also looked slightly too pale for that species. It had a strange, asymmetric primary pattern, with a complete P10 tip on the right wing (unusual in Yellow-legged gull) and a thin subterminal band on the left. However... this bird lacks the long P10 tongues typical of "omissus"-types and its head also just looks exactly like a Yellow-legged gull - really mean expression and heavy, blunt-tipped bill with massive red gonys. I guess this is also possible on large, male Herring gulls, but this feature, combined with the lack of primary tongues (although admittedly still perfectly fine for argentatus) and also the mantle shade (lacking the bluish hue that I am used to seeing with argentatus) make this a far from straightforward case in my opinion. I wonder if it is a hybrid, which would explain its mantle colour and Yellow-legged gull jizz. Or perhaps it is just a large, male yellow-legged Herring gull and I'm being far too fussy about something that isn't even a discrete population any more - "omissus" was invaded by pink-legged argentatus decades ago, thus the classic yellow-legged phenotype is heavily diluted. Either way a fascinating bird. According to Chris Gibbins, Eastern michahellis can also have much reduced, sometimes completely absent P5 marks, combined with much longer primary tongues... 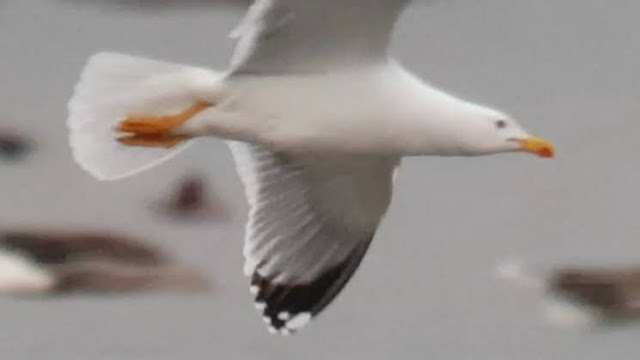 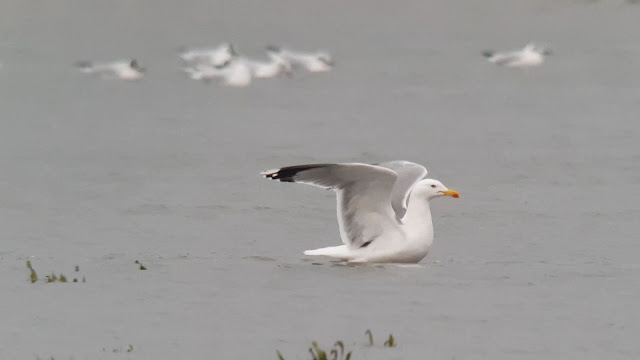 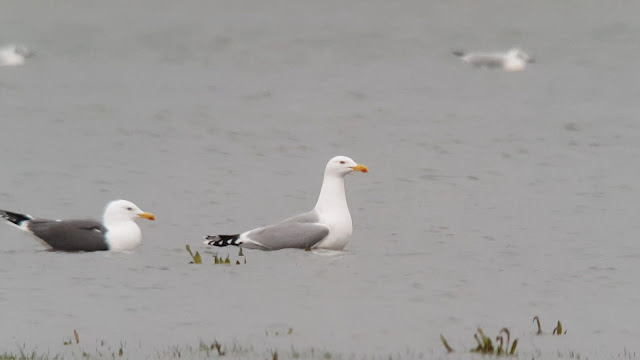 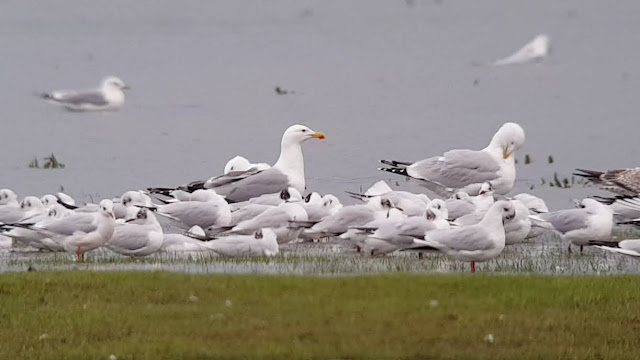 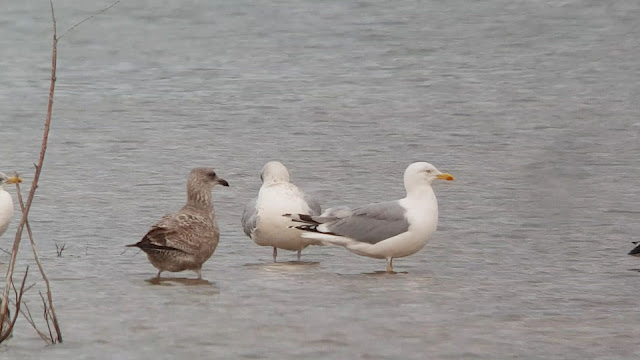 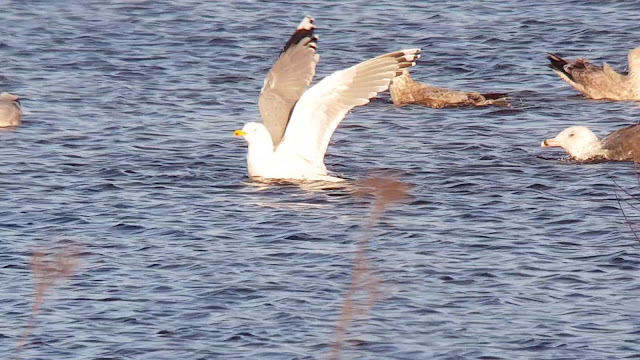 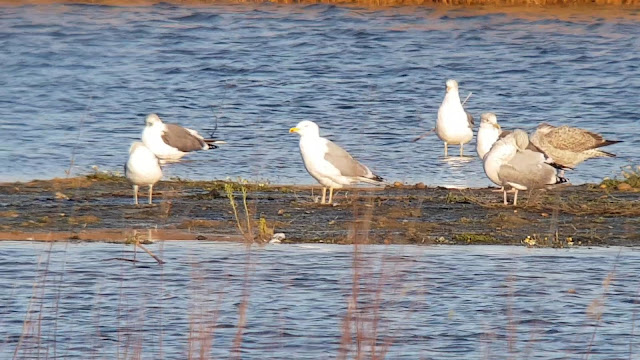 All the above birds make me think more and more about what really constitutes a "species" in large, white-headed gulls. As a biology student, I find it difficult to regard a group of populations that can freely interbreed to produce fertile, hybrid offspring as "species" in any proper sense of the word. However, I don't think they should all just be lumped into one! Genetic differentiation between these populations is complex, and often at odds with the phenotypes that we recognise in the field. For instance - Iceland, Slaty-backed, and Glaucous-winged gulls can in most cases be easily identified in the field using morphology, but mtDNA sequencing reveals that there is very little genetic differentiation between these species, possibly due to their recent evolutionary origin or periods of hybridisation. In other cases, evidence from mtDNA implicates whole or partial reproductive isolation despite overlapping ranges and some recorded cases of hybridisation.
There is also a very interesting discussion about whether the clinal variation in large gulls is due to local adaptation, differential trait expression caused by phenotypic plasticity, or hybrid swarms in the contact zones between different "species" populations. Put simply, are the large, frosty argentatus with pale brown primaries (from the "far North") like this because of a local, slightly genetically distinct population, a gene-environment interaction, or the introgression of Glaucous gull genes? The latter is actually what has been concluded by at least one research paper (Crochet et al., 2003), i.e. that most intraspecific variation in gulls can be accounted for by hybridisation.
A third complicating factor is the expanding range of species such as Caspian gull, which is moving rapidly westwards and hybridisation with argentatus Herring gulls is now frequent. Many of these hybrids cannot be sufficiently separated from individuals that fall within the variation exhibited by Caspian gull from the core range - data from ringed individuals of known parentage has shown that some second generation hybrids are virtually indistinguishable from pure birds. However, there is a particular "look" about many of these East German and Polish birds, and I would argue that in itself this is a distinguishable phenotype - very often combining a Caspian gull jizz with rather Herring-like scapulars and heavily marked greater coverts - XJNE being a good example of this form. These birds also tend to have a streaky plumage and a slightly Herring-y facial expression. Ronald Klein, who works on these hybrid colonies in Eastern Germany has thrown the name "Larus polonicus" around to describe this distinctive phenotype. Perhaps in Europe we will soon have names for these hybrid swarms, in the same way that birders in the USA refer to Cook Inlet and Olympic gulls - both identifiable hybrid populations.
What does any of this actually mean for the British birder wanting to identify a Caspian gull for their list? Potentially, a larger number of confusing looking birds in the next few years - instead of dividing these down the middle into "makes the grade for Caspian" and "non-Caspian" perhaps we should be recognising these as a distinctive and increasing hybrid gull and only safely identifying the most classic, obvious "Pontic" Caspian gulls. This of course means that we will be chucking many non-classic "pure" Caspian gulls into the unidentifiable bin - but for birders who value the integrity of their species list then this is probably the best option. For me, since I think the whole species thing is far more fluid anyway I prefer to simply pick out "Caspian-type gulls" and not care about the exact genetic provenance of any particular bird. After all, a bird that may look completely classic may contain Herring gull genes somewhere down the line, which would be completely impossible to detect in the field unless the bird was ringed and its parentage known. That isn't really what birding is about for me - it's about being able to pick out identifiable, unusual phenotypes in the field. I just like the fact that they look different to Herring gulls and come from the East!
For this reason I found the extensive debate surrounding the 2011 Rainham Slaty-backed gull rather strange - although it was right to correctly establish the identity of the bird, from my point of view, it wouldn't have actually mattered if the bird had turned out to have had some Vega gull influence (although the mantle colour has now been documented as easily within variation). It's a brilliant Siberian gull that's travelled thousands of miles to be here, and an absolutely amazing find regardless of its exact ancestry! I fear that if a Cook Inlet gull were to turn up in the UK it would generate little interest simply as there is no tick box on the British List for "Glaucous-winged x American Herring gull" (and no chance of it later being promoted to full species status!) - despite being a mega rare American vagrant. I find the devaluing of hybrid birds, especially gulls to be quite a shame and it seems purely linked to a listing mindset. It doesn't change anything about the the find (or indeed the twitch!) - it would still be a spectacular, visually distinctive vagrant - yet just because no chance of an extra tick I think most would pass it over. I hope to be proved wrong if one does turn up!
at February 22, 2021 6 comments:

For my Oxfordshire birding I have somehow ended up adopting three patches - Port Meadow (the original and the best), Appleford (because of t... 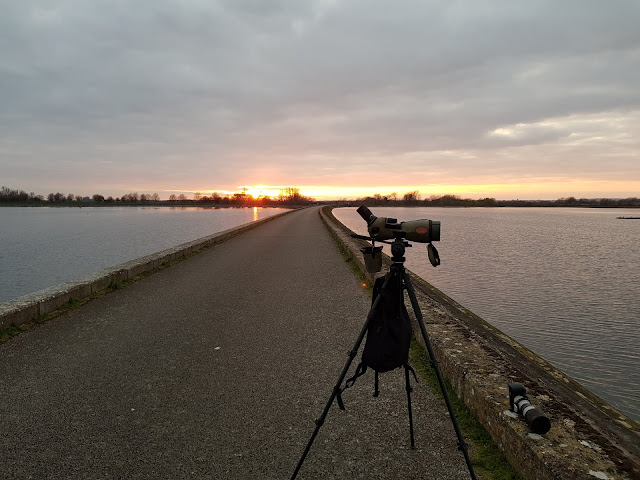